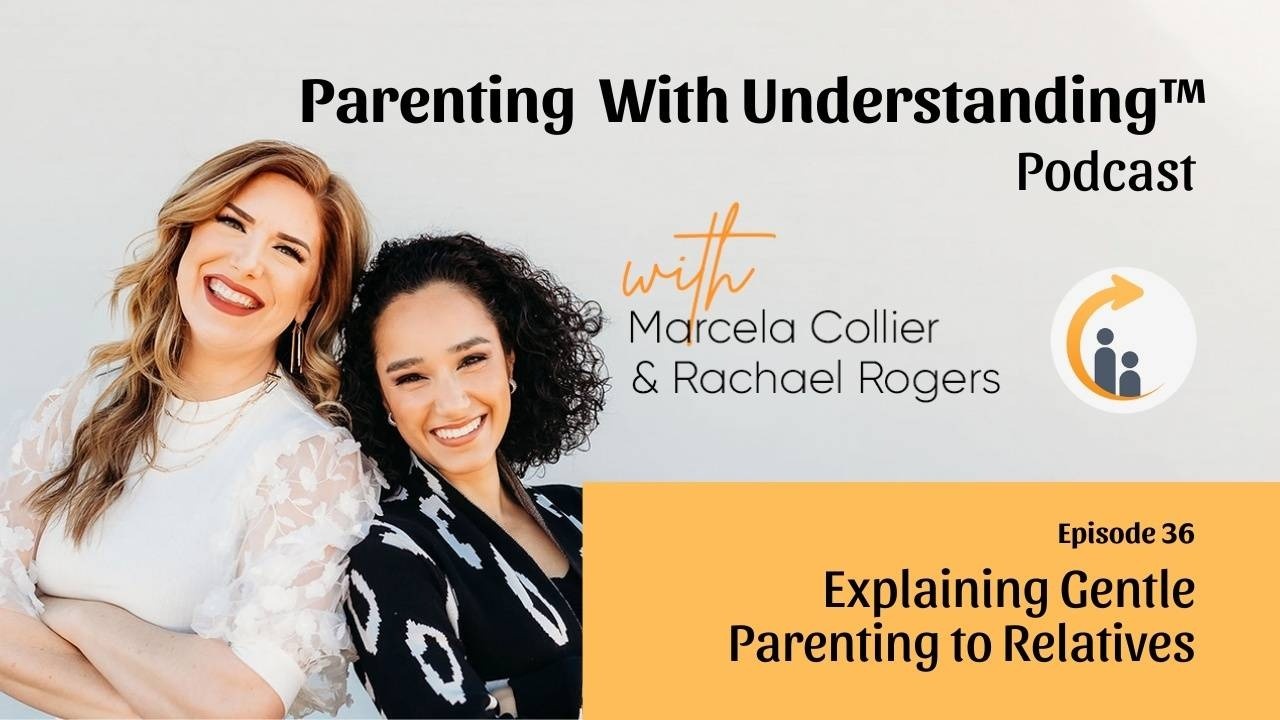 Hi, Cycle Breakers! Today’s episode is especially helpful for this time of year, when most of us are preparing to spend December holidays, like Hanukkah, Christmas, & New Year’s Eve with relatives. We’re giving you tips that’ll help you respectfully explain your gentle parenting philosophy to them. We’ll also discuss how to navigate some of the uncomfortable situations you might find yourself in if they push back on your parenting boundaries. So, if you’re spending time with family any time soon, you’ll definitely want to tune in & take notes!

Those Who Don’t Get It

These are the ones who ask, “If you don’t spank or yell, how will they learn to respect authority?” or, “How do you expect them to survive in the ‘real world’ when others aren’t as kind & considerate as you?”, among other things.
If you’re newer to this parenting style, you might not feel totally confident in your abilities to adequately explain it to them. First, consider the vibe they’re giving off when they ask. Is it a curious or condescending tone? Basically, are they really trying to understand or are they giving attitude/mocking?

Assessing the status of their nervous system will help you know how to approach them with an answer. It’s important to know that someone who’s triggered won’t receive the info you present to them well, regardless of how thorough, polite, or respectful you express it. You’ll just end up frustrated & upset. It’s best to explain when both, you & them, are calm.

However, if they’re asking to genuinely learn more, we suggest leading with compassion & non-judgment. This is especially true if your parents are the ones asking. Remember that all of this new information likely exposes a tender spot for them, causing them guilt & shame for the opposing choices they made while raising you. Overall, try to be conscientious & tactful in your response, so they don’t perceive it as judgment, shame, blame, guilt-tripping, or know-it-all behavior from you.

Also, we encourage you to ask them, “I’m curious…I wonder why you’re thinking that way/asking that question? Are you thinking about something specific?” Try to figure out the motivation for asking. Most of the time, it’s due to false beliefs they have about themselves, kids, parenting, & the world. If they view the world as an unsafe place, they’re more likely to believe that the best way to survive is by fighting one’s way through it, so gentle parenting often seems ineffective to them.

Most importantly, clarify that parenting with understanding™ involves seeing things through your child’s point of view & that gentle parenting isn’t equivalent to being permissive. They may consider it as such if they believe that bad behavior must immediately be nipped in the bud to prevent the child from transforming into something sinister.

You can help them rewire those mindsets by getting them to think critically. During a calm moment, explain how behavior is also the communication of a need & that part of your parenting is to always seek the “why” behind their behavior because that’ll lead you to their need.

Alternatively, ask them to remember a time in their childhoods when they felt unheard, misunderstood, or disrespected. This is another good one: ask them to recall a time where they were wrongly accused of being rude or disrespectful to their parents, even though they were just genuinely trying to communicate, & their parents shut them down.
Then, ask them to visualize a trusted adult approaching them & validating their feelings. How would they have felt if their emotions were acknowledged, they were encouraged to express themselves, & offered help with whatever they were feeling, instead of being dismissed? This type of dialogue can begin a shift in their perspective of gentle parenting.

In addition, mention that you give your kids space when they’re dysregulated, but always go back to teach them once they’ve calmed down because that’s when their brains are better able to receive & process the lesson.

By doing this, you’re modeling healthy ways to communicate their needs & feelings in the future. They’re learning how to self-regulate, maintain better mental health by not being overcome by their circumstances, & problem-solve without using scare tactics, aggression, control, manipulation, or avoidance. Practice & mastery of these skills will greatly help them survive the “real world”.

Another good tactic is to remind your parents or in-laws of the cycles they’ve broken (if applicable). Ask them to think of just one thing they did differently from their parents while raising you. For my mom, it was supporting my decision to earn a college education because her parents denied her the opportunity, since they didn’t believe in women receiving higher education. My mom said that seeing me achieve something she wasn’t allowed to do made her feel proud, reaffirming that she made the right choice.

Then, I explained that the same way she did something with me that her parents didn’t agree with or understand with her, is exactly what I’m doing with my twins. I don’t need her understanding or approval. I just need for her to respect & trust in my parenting method, which will turn out fine, exactly like encouraging me to go to college turned out fine for her.

Explaining to Your Spouse or Co-Parent

The first step to an empowered conversation with anyone is consent. Many times, parents who try to explain gentle parenting to their spouses fall short in this area. They come off as intrusive & the conversation feels more like a lecture. Also, not having their consent often leads to them feeling attacked & violated, especially in the middle of a child’s tantrum. That’s not the time for a conversation & will likely cause an argument.

Rachael confessed to being guilty of this with her husband in the past, as a result of her trauma response. He ended up feeling disrespected & undermined as a father. She had to learn to trust his heart, knowing that he’s a loving dad who always wants the best for their daughter. She worked at stepping away & allowing him to gentle-parent in his way, even if it wasn’t exactly how she’d do it. Over time, his confidence grew, he got fully onboard, & even steps in to give Rachael a breather whenever their daughter’s behaviors feel too overwhelming for her to handle.

You should know that although my husband has always been a gentle parent & is a school guidance counselor with extensive knowledge of child development, he’s human & has had his moments of being reactive. Last week, I overheard him tell one of the twins to “stop crying”, which was surprising because that’s a mutual boundary we’ve agreed upon. I knew something was off because he wouldn’t usually respond that way, so I waited about an hour before approaching him. I told him that I noticed his reaction & asked what he was feeling at that moment.

By approaching him this way, it showed him that I wasn’t judging him. I just wanted to check in with him to learn more, so he opened up. He admitted to feeling overwhelmed & acknowledged that he knew he messed up as soon as the words came out of his mouth. I didn’t have to say anything because he was remorseful. Ultimately, it’s important to show our partners grace throughout this process, especially in the beginning. Not only will it help your parenting, but it’ll also help improve your marriage.*